As a professor of architecture striving to help his students understand 3D geometry, Rubik created a puzzle that would, upon its global manufacture and distribution in 1980, capture the imagination of generations to come. The Rubik’s Cube became one of the most popular toys in history, with more than 350 million sold to date. Today, Rubik is a staunch advocate for STEM and arts education and encourages his own company and others to lead the charge. His first book, Cubed: The Puzzle of Us All, is out now. 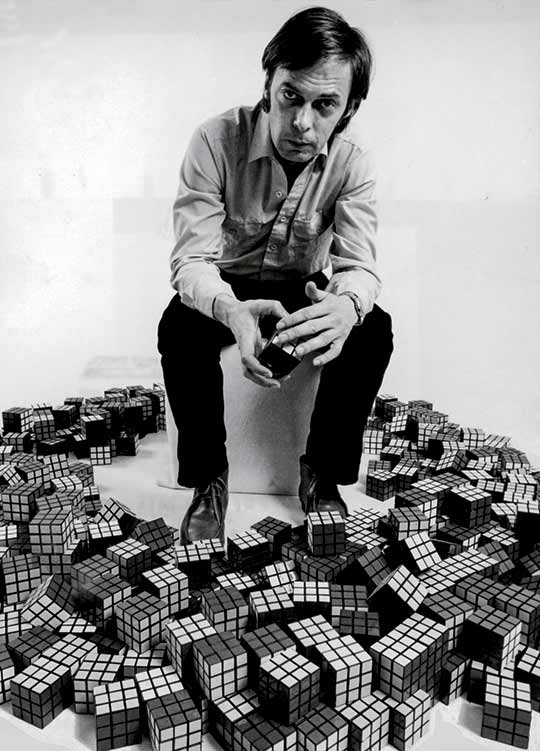 HBR: Your father was a flight engineer. How did that influence your career choices?

Rubik: Father and boy, parents and kids—we are based on them, both through our genes and by seeing how they live. He was not a person who wanted to push me in any direction. I actually spent more time with my mother and was closer to her. My father was working in the countryside, but I saw his work, and it was important to me. After finishing his education at a university in Budapest, he and some other young engineers decided they wanted to manufacture airplanes, gliders, and other products. So they applied for a loan and got one, and they built a factory, which I got to visit.

HBR: Did you grow up tinkering with things?

I was an ordinary boy, wanting to do everything possible—and not possible. I climbed trees and had fun in other ways that weren’t allowed but were exciting to me. And I was curious and tried to make things. Nothing special.

HBR: Who else has inspired or influenced you in your career?

I’m impressed not by people but by what they’ve done or what they are doing. I admire literature, art, engineering—how things are accomplished. So I can’t name people, just what they’ve created. I hope that my fame, if I have any, is not because I’m different from others but because of the Cube and its content.

HBR: You studied art then moved on to architecture. Why?

I started in middle school with painting, sculpture, and so on, but I went to university to study architecture because, in my view, that is art as well. Next to the practical, it has the aesthetics.

HBR: And then you became professor. What makes for a good teacher?

It’s important to share what you know with students but more important to discover their capabilities and help them find out who they are and what they’re able to do. Learning is not the accumulation of knowledge. It is building a capability to find new possibilities in novel circumstances.

HBR: Where did you get the idea for the Rubik’s Cube?

I was interested in geometry, construction, and working in three dimensions and looking for a tool to explain 3D transformations. That led me to discover the Cube. I don’t like the term “invent” because it’s really just finding what is already there but not visible or tangible to others. You know, another person can take a walk on your road and see stones. But you might see that one has the potential to be a diamond even though its qualities are hidden. And hopefully you also have the patience to find what is inside.

HBR: How did you approach the development of the Cube?

First, I needed to understand the nature of the object and how to make it work. I used my hands, simple tools, the design school workshops. I sometimes used food because it’s easy to work with. That took a few months. And then there was the process of transforming it into a product and putting it on the market. That took three years. I started in 1974, and the first Magic Cubes were produced in Hungary in 1977. Then it was another three years before we introduced the Cube to the world market. We’re celebrating the 40th anniversary of that now.

HBR: What hurdles did you face in trying to sell it internationally?

When you make something, you need to prove to others that it has a value. Finding people who agree with you takes time and luck. You need a partner with expertise and a willingness to experiment. And you need teamwork, so you are moving together. Our first manufacturer was a very small Hungarian company without enough resources. But the Cube I made with that company became very popular, and based on that and growing interest from abroad—especially from mathematicians—we wanted a partner beyond the closed economy of the Iron Curtain. We finally found an American toy company and made a deal and went to the big toy fair in New York City with the Cube. We had to change the name to Rubik’s Cube because there were copyright issues with Magic Cube. Then there was a craze. We sold more than 100 million Cubes over the next three years.

HBR: Were you happy with the decision to put your name on the product?

I was not happy or unhappy. It was a suggestion from the American company because of legalities, and I accepted. There are many products holding the names of their creators. But I’m sure if you’re using a Hoover to clean your home or shaving with a Gillette razor or driving a Porsche, you’re not thinking about the men behind them.

HBR: When did you realize the impact the Rubik’s Cube would have on the toy market?

I didn’t recognize it when it was happening. I recognized it after. When we started, puzzles were not in the mainstream for the toy business. I’m not speaking about jigsaw puzzles, because when those are done, your game is finished; you can frame it or put it back into the box. My kind of puzzles are more complex. They’re not finished when you finish. You can do them again differently or faster. Those are more popular now, and everyone is looking for novelty. In writing the book, I also investigated the impact the Cube had in different areas. For example, apps—more than 3,000 are connected to it in some way. And books—some were written about it, a few of which sold several millions of copies; others were about different topics but featured an image of it on the cover to represent problem-solving or creativity or complexity; there are more than 500 of those.

HBR: Some people wrote books explaining how to solve it. Did that annoy you?

Not at all. We needed to demonstrate to the trade and other people that it was possible to do, because the difficulty level is so high that it’s seemingly unsolvable. But obviously I think it’s best to find the solution by yourself, as with any puzzle.

HBR: You later developed other Rubik products. How did you keep innovating and decide which ideas were worth pursuing?

Most people have lots of ideas. I think what makes me different is I have a good sense for evaluating mine, and if I find some value in one, I don’t give up until I’m able to perfect it. Probably the most important thing, though, is that I love what I do. That’s a key element to achieving your goals.

HBR: When you have a hit product, do you always feel pressure to match that success?

I never planned to achieve this peak and had no idea that I would. And, after it, I had no thought that I’d like to do better. My only goal is to do well. I’m not thinking about whether people will like it or not. I need to love it and meet my targets, nothing else. What happens after that depends not on me but others. The Cube created the strongest connection with people—which is harder than being popular—maybe because it taught them that they could solve difficult problems and rely on no one but themselves to succeed. It has meaning, and that’s enough for me.

HBR: Why did you create your own studio?

I did it because I had the financial ability to. I had an idea to try to create a team and work together because I didn’t do that before. And it was successful, but I found out it’s not right for me. So the studio still exists, but it’s a one-man show. Meanwhile, the Rubik brand carries on with an English company that has a great team of people; I’m on the board of directors and can make suggestions and have influence, but I’m not part of the company’s everyday operations.

HBR: As an advocate for STEM education, what improvements do you want to see? And what should companies do to help?

I prefer to call it STEAM, because I think art is an important part of education. The key is starting early, from elementary school, and continuing on and on. This small blue planet and its entire interdependent population depends on future generations learning these subjects. I and my company have tried to help.
The Cube has become a universal symbol of everything I believe education should be about: fostering curiosity, the rewards of problem-solving, and the joys of finding your own solution. We’ve introduced the You CAN Do the Rubik’s Cube curriculum to hundreds of schools across the United States and are expanding it elsewhere to help math teachers impart learning about algorithms, geometry, ratio and proportions, mathematical operations, algebra, combinatorics, and even physics in an engaging, interactive, tangible way.
Previous Home Next
I'm Reading
X